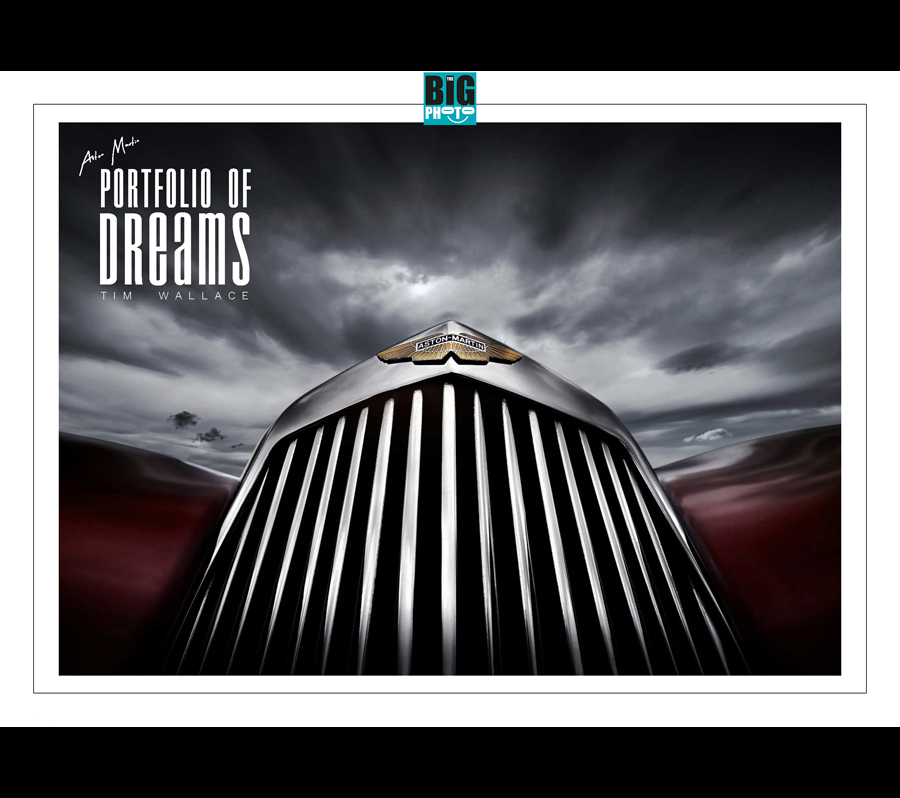 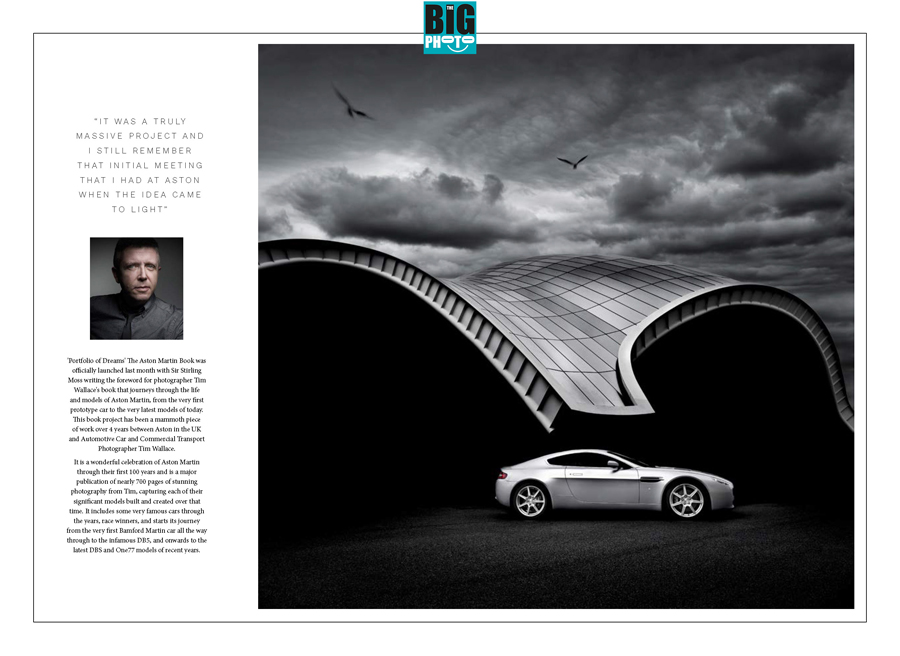 'Portfolio of Dreams' e Aston Martin Book was o cially launched last month with Sir Stirling Moss writing the foreword for photographer Tim Wallace's book that journeys through the life and models of Aston Martin, from the very rst prototype car to the very latest models of today. is book project has been a mammoth piece of work over 4 years between Aston in the UK and Automotive Car and Commercial Transport Photographer Tim Wallace.
It is a wonderful celebration of Aston Martin through their rst 100 years and is a major publication of nearly 700 pages of stunning photography from Tim, capturing each of their signi cant models built and created over that time. It includes some very famous cars through the years, race winners, and starts its journey from the very rst Bamford Martin car all the way through to the infamous DB5, and onwards to the latest DBS and One77 models of recent years.

“THEY ARE TRULY AMAZING CARS WITH SUCH A WONDERFUL RICH HISTORY.”

“Being asked to create all the photography for the Aston book was indeed a great honor and it was a project that I worked on for over 4 years. The book primarily a ‘coffee table’ style book of great photography looking at each of the models through the history of Aston Martin design and endeavor to create cars that instill both passion and soul. It was a truly massive project and I still remember that initial meeting I had at Aston when the idea came to light. The task to create a pictorial book of beautiful photography that followed through every model that Aston Martin ever made from the very rst prototype Bamford A3, a car that is closely guarded and indeed priceless today, through then to all the variants and models to the cars of today that Aston Martin have become so well known for crafting and producing.

Some of the cars that I have captured for this book such as the Zagato’s VEV1 and VEV2 that are very rare and today are in the same condition as the day that they drove out of the factory gates, they are truly amazing cars with such a wonderful rich history. For me personally it’s a joy to shoot these cars and we have been working with Aston in the UK and Europe for just over 10 years now so I am very familiar with both the company and the vehicles themselves which is a major bene t to the project for me personally.
I get asked a lot by people if I drive the cars, the answer is yes I do, as I often position them myself into where I need them for the shoot, some cars are indeed easier to drive than others especially some of the pre war models that have their accelerator switches on the actual starring wheel, not to mention those where the pedal layout is all mixed around... it takes a bit of concentration whilst driving those around as it really is the very last car in the world that you would want to damage, safe to say that my insurance for such things is very signi cant indeed! To me these cars are personalities. So, it’s not just a case of how I want to shoot cars; I’ve got to think about what will make people want to buy this particular car? What will make the hairs on the back of their neck stand up?”

“Shooting premium cars – yeah, it’s nice, but I basically shoot cars you don’t need and probably can’t a ord but you really want them. It’s my job to create an image that gives you the strong feeling that you want to be part of that life.” 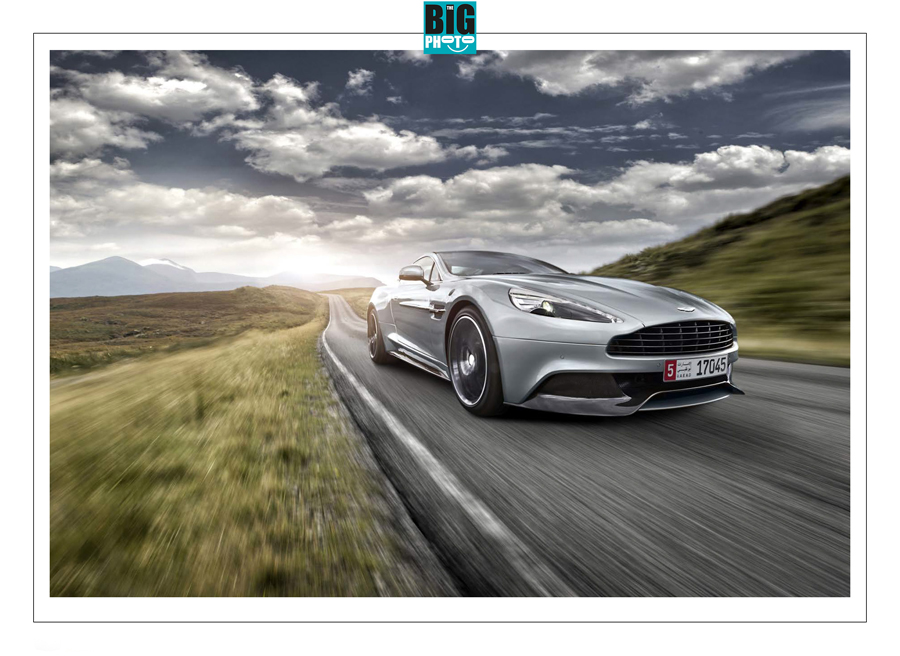 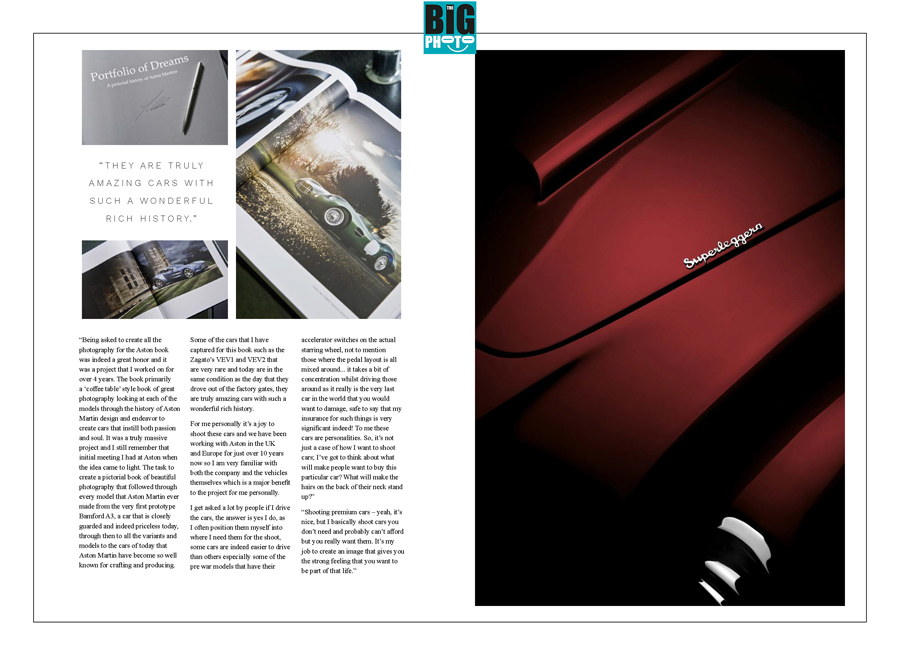 It was in the early part of 2017 that the provisional rst layouts where shown to me and indeed having the material to ‘ ll’ almost 700 pages is no easy task but the project progressed and this August the rst 2000 books were delivered to Aston where I visited to sign the Limited-Edition copies that sold out virtually straight away after being announced. I think it’s safe to say that I was smiling that day, and I guess for me what made it that bit extra special was to have the honor for Sir Stirling Moss write the foreword for my book, a great honor indeed.”
The Bamford and Martin A3 is with out a doubt one of the most signi cant Aston Martin cars in the World today and also is the oldest surviving Aston Martin known. Tim spent some time with this amazing car to capture it for the Aston Book. The photography that Tim shot of the Bamford and Martin A3 makes up the very rst chapter of the Aston Book, a pictorial celebration of Aston Martin through the years. Bamford and Martin Ltd was incorporated in 1913 to formalise a partnership between Lionel Martin and Robert Bamford. They had been modifying and selling Singer cars from their workshops at 16 Henniker Place, Callow St, Kensington, London. A decision was made to start and build a whole car of their own design and by 1915, the rst Aston-Martin, named Coal Scuttle hit the road; more cars weren’t built until 1920 but that was due to the Great War getting in the middle of things. Thank goodness they build them a little faster now. 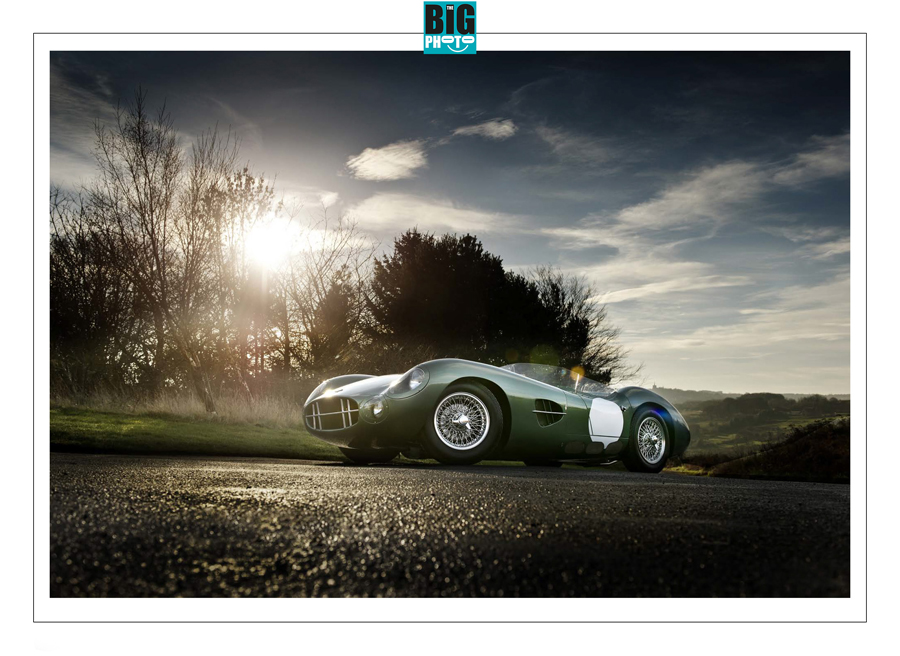 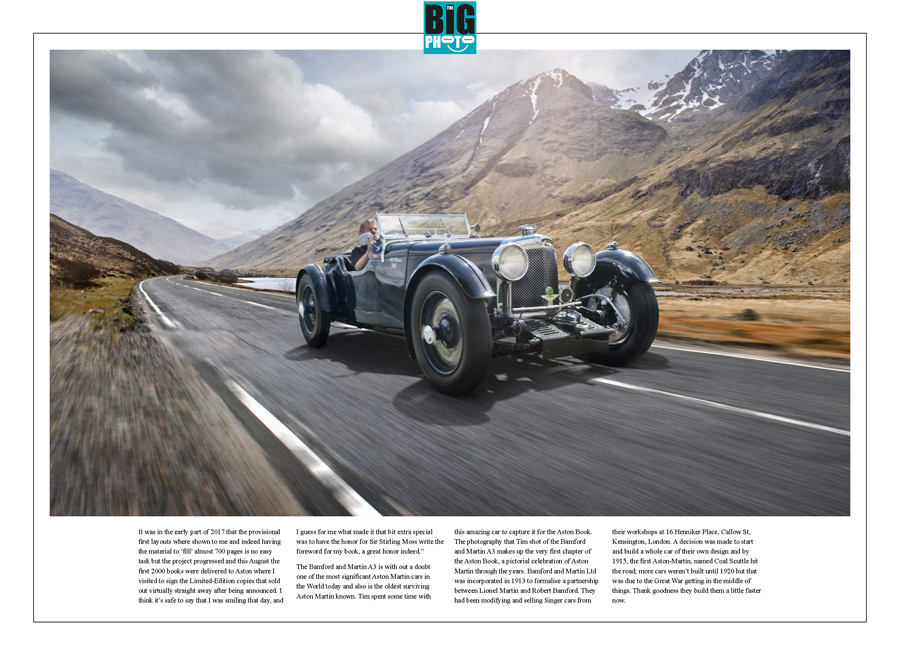 Following Coal Scuttle, three more prototype cars were built including Bunny (no longer in existence) and the car, above, chassis number A3 which was the third Aston Martin ever built and the oldest in existence. Despite being modi ed again and again it somehow survived. It is now owned by the Aston Martin Heritage Trust (AMHT) and will undergo a full rebuild back to 1921 speci cation including the black paint which lead to it having a pet name that would not be considered suitable in this day and age. All of the Works Cars of Bamford and Martin had pet names, something started by Lionel Martin’s wife, Kate. This tradition continues to this day as many if not most have pet names for their cars. Over the years Sir Stirling Moss has had an amazing racing history and has enjoyed some of that through his involvement with Aston Martin so to have the book’s forward written by Stirling is truly a tting start to that pictorial history that Tim has set out to capture across the books chapters and pages. Stirling’s rst outing for David Brown’s team took place at the 1956 Sebring 12 hours in Florida. He had tested the works Aston Martin DB3S at Goodwood in the February of that year following his return from a successful two race campaign in Argentina. Having agreed to race for David Brown when his commitments to Maserati allowed him to do so, Stirling accepted a signing on fee of £50, which was modest, even by the standards of the time. The 1956 Sebring would be the rst of six races over the course of the season that Stirling would race the Aston Martin DB3S, for the race, he would be partnered with Peter Collins in one of three works Aston Martin DB3S’s entered for the 1956 Sebring 12 hours. Given that the team had calculated that the brakes would last no more than eight hours and that the tyres would last no more than two hours, Stirling did not start the race bursting with con dence. Nevertheless, he made a good getaway from the Le Mans start and managed to hold second place between Hawthorn and Fangio, running three seconds a lap quicker than he had managed in practice. It was not to last, 90 minutes after Peter Collins took over driving duties the engine broke and they retired from the race. Happily Stirling would go onto win at Goodwood in the Aston Martin DB3S at the Easter meet the following month and at the 1959 24 Hours Le Mans race, Aston Martin would enjoy an outright victory at the infamous endurance classic giving Stirling’s one of the most famous wins of his racing career. 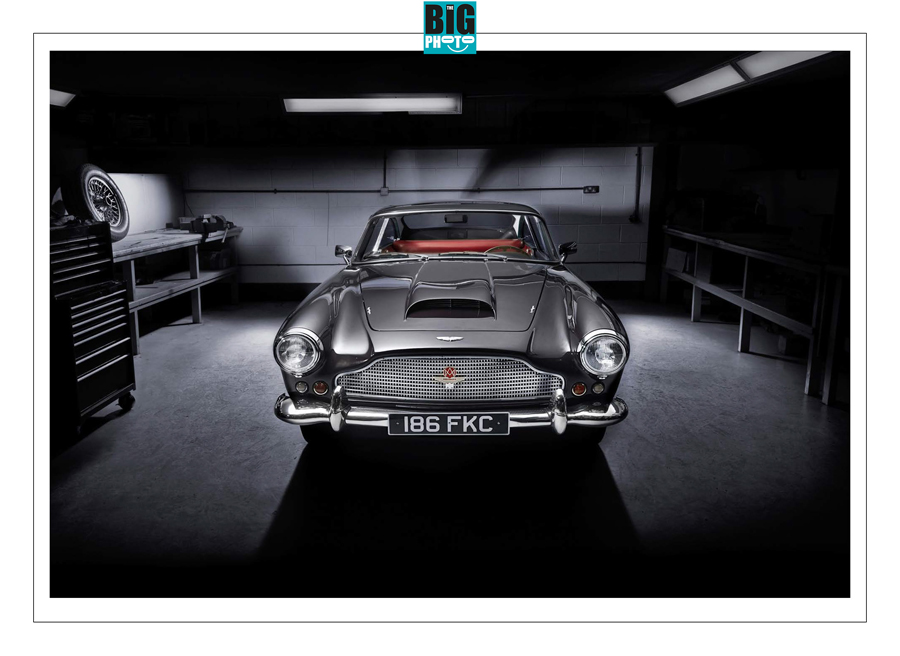 Many of you will be aware that Aston Martin have always held a special place in my heart, and I was back behind the wheel of the fantastic DBR1 recently as part of the company’s centenary celebrations. is drive around the Nurburgring once again reminded me of just what a beautiful car it is. There’s something about making your car not only perform well, but look fantastic too.
I’ve long held the belief that ugly cars don’t win races, no logic to it I know, but maybe it has something to do with attention to detail. e DBR1 was a great example of this, not only one of the nicest cars I’ve ever driven and winner of the World Championship in 1959, but one of the best looking too. The DBR1 embodies much of what I’ve always loved about British road-racing cars, the incredible engineering, the hand-cra ed, traditional workmanship and the exceptional beauty. Indeed that lovely old racer is the very essence of Aston Martin’s own mantra, Power, Beauty & Soul. Many books have been written over the years about the history, engineering and racing heritage of Aston Martin, but what I love about this book in particular, is its focus on style, and Aston Martin have always had great style. I remember when Lance Macklin and I drove a factory DB2 in the Daily Express Rally, it certainly attracted a lot of pretty girls all around the UK
I’ve always been a big fan of design & technology and when coupled with style, you know you are going to have a winning formula, and it’s this that has led to Aston Martin becoming such a big part of British heritage. We all know that Aston Martin is one of the world’s most recognisable brands, and the desirability of these stunning cars is well documented, with classic examples in particular achieving an incredible status. This must be due in no small part to the great attention to detail and simple, beautiful lines a orded to every model. An Aston Martin will always look fantastic, whether parked in the high street or tearing down the back roads. This fabulous book acknowledges this as never before, and every image has been given the same attention to detail that Aston Martin gave the original cars.
It’s obvious as you ick through the pages, that an awful lot of time and e ort has gone into its creation, and the result is a book which I’m sure will take its place among the “must haves” for anyone interested in car photography and not just those with an interest in Aston Martin
Well done Tim Wallace and well-done Aston Workshop for having the vision and the tenacity to make this project a reality. 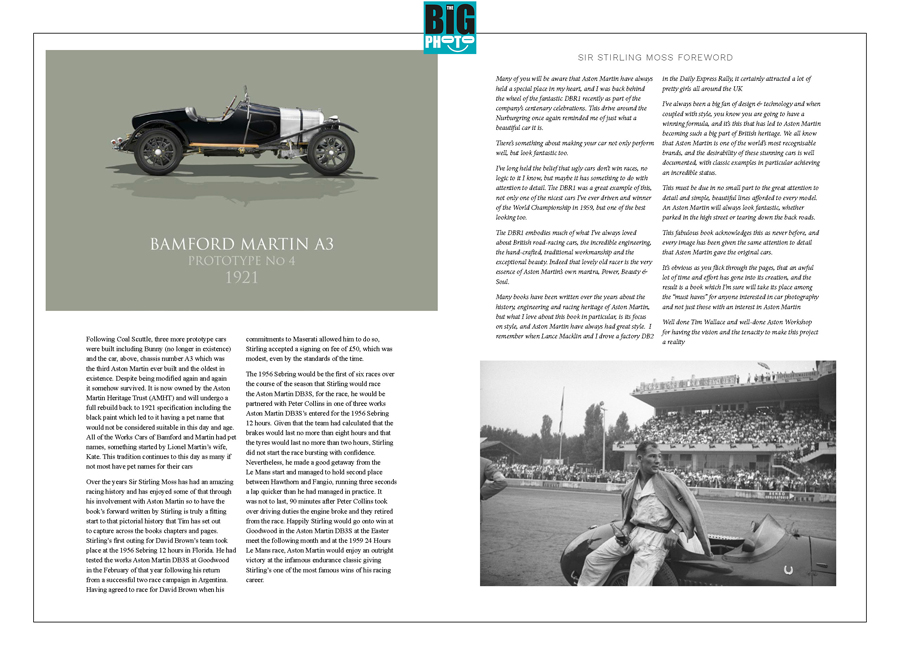