'The Architect of Light' Interview with E-Zine Magazine 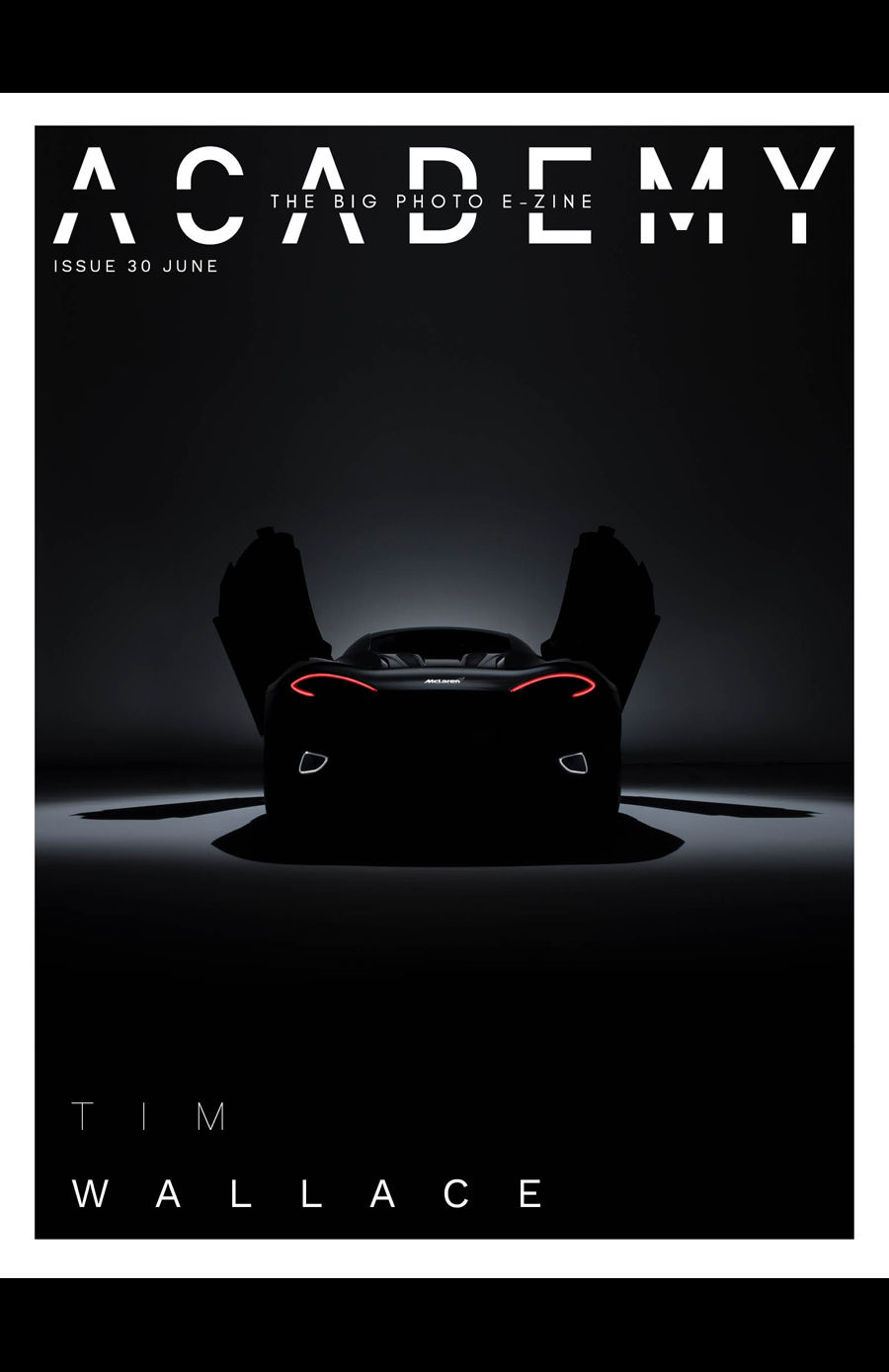 Tim is very well known within the automotive car industry for his open approach and he is regarded by many as one of today’s leading commercial automotive car photographers with a unique strong style of work and creative approach that inspires not only his clients but also their customers, something that was re ected recently when he was awarded ‘British Commercial Advertising Photographer of the Year’ and ‘Car Photographer of the
Year’ at the Industry Awards.
Tim has worked with clients across the globe such as McLaren, Lexus, Aston Martin, and Peugeot for many years to providing high quality photographic image assets for use in both his clients marketing and advertising campaigns. An award-winning creative photographer with a passion for what he shoots and a distinct style who is known for both his ability to perform complex lighting and who is equally at home both on location and in studio.
Tim shoots some of the world’s most iconic car brands through his commercial work, operating globally for his clients and agency partners. He is well known within the industry and has built a solid reputation over the years to deliver a project both on time and on budget effectively. A renowned creative with an eye for detail and a passion to create new dynamic client work. 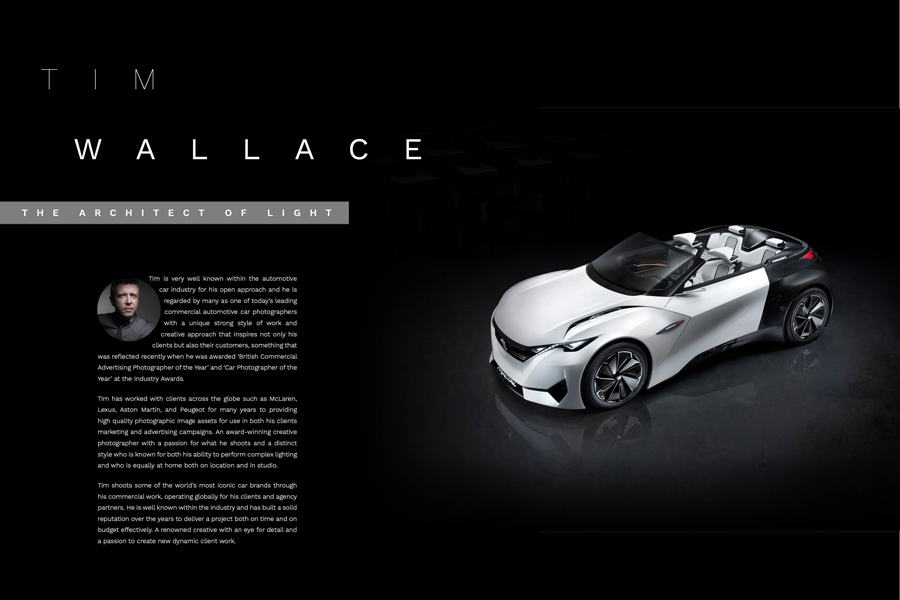 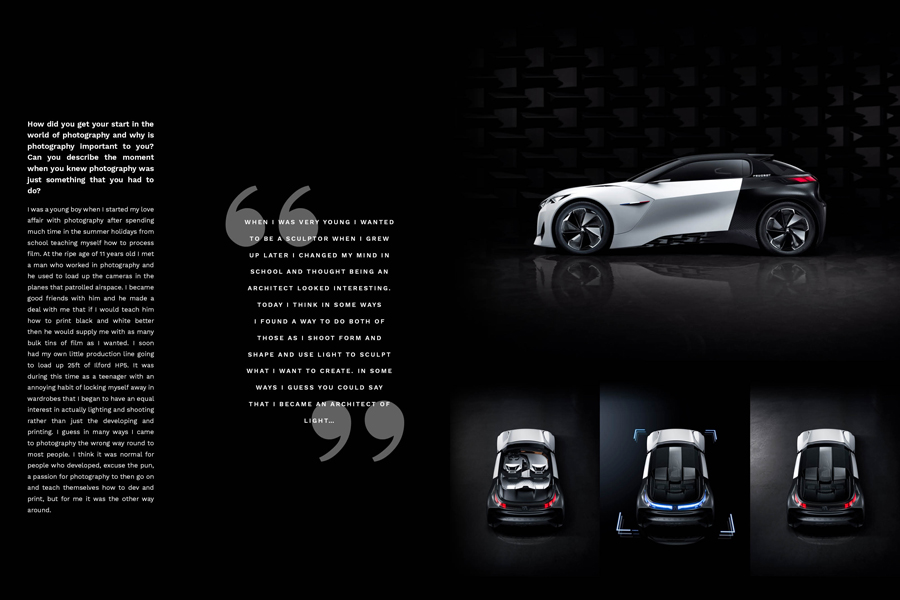 Cars exist all around us in the modern world and they represent a major part of our lives. It is my goal not just to show you what a car looks like but to inspire the viewer to see beyond that and get a real sense of how a car makes you feel, to be quite literally inspired so that drives forward your desire to be within that scene yourself. This is something that I am very passionate about. My work is shot out on location as well as in a studio, giving a real sense of not only the car as a personality but also the possibilities of what that car can create emotionally and as a personality in its own right.
Shooting in the automotive eld is where I started out and gradually over the last 7 years that has encompassed all transport from aircraft and large specialist trucks through to marine yachts and helicopters. 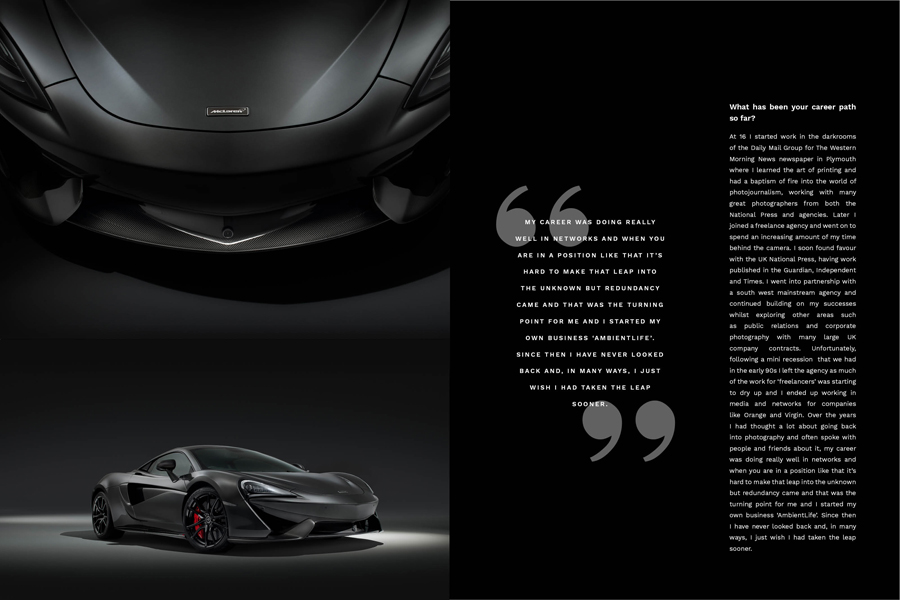 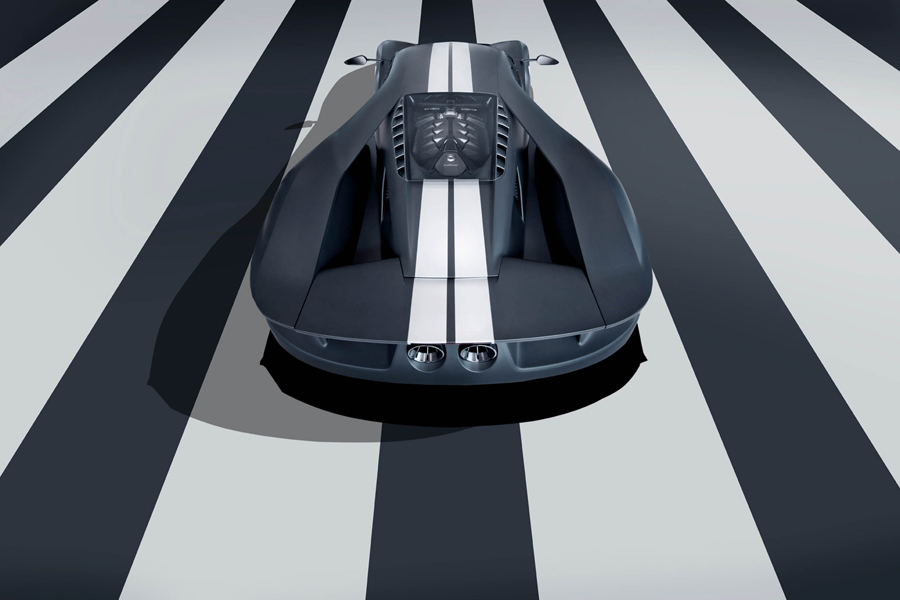 Learn not only how to light well but also how light works so that you can create your own lighting in any given situation as well as best use the available light around you. Far too many people think that you have to light the hell out of something to make it look great when in some circumstances the very opposite is the case and keeping it simple can really make something beautiful.
Lighting is a very personal thing and in truth its simply not possible to copy a lighting set up and get the same result. The way that I approach lighting is very simple, in cases where you will have multiple lights in play it’s important to ‘light up’ to the subject slowly, a lot of my work I like to look as if it’s not been lit at all, subtle so to speak.
The best way to do this is to set up each light one at a time, do a test shot and when you’re happy with the result move onto the next.
There is no easy answer to lighting, it’s simply a piece of the puzzle or indeed a piece of the photographer’s tool kit that makes his work look different to the next guy, a style, a mood, his technique, it’s personal and it’s what each photographer must develop for themselves to achieve development as a photographer. 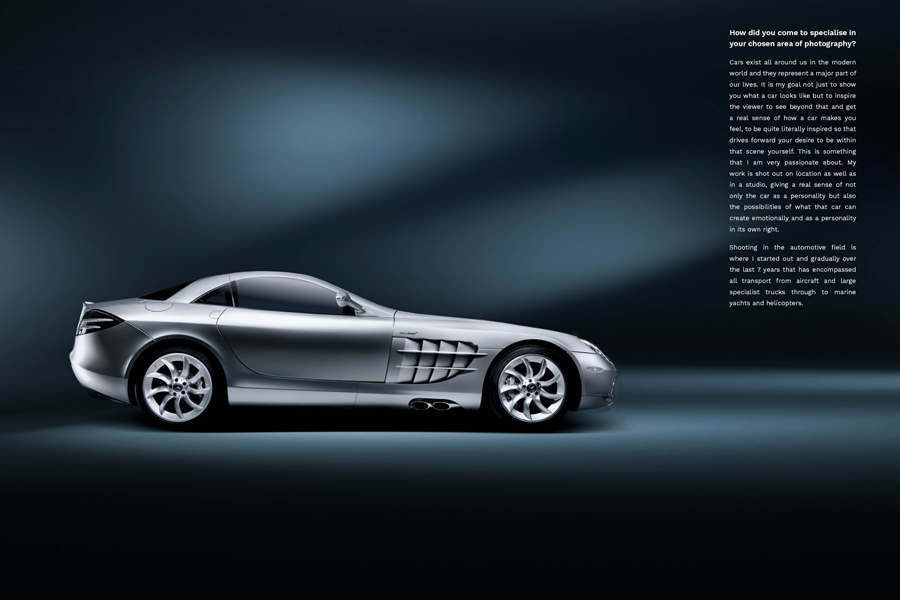 Last year I took on McLaren as a client and the rst commission from them was to shoot the McLaren Special Operations Brochure for 2019. It was pretty intense work over a 2-month period with a few weeks for that being in studio. The subject car was dark metallic grey with lots of black carbon bre all over it that also had a glossy top coat over it. From a car photography point of view, it’s probably about as hard as it gets to light really well. On one of the mornings that we were getting ready to shoot the next series of shots the studio oor needed repainting ready for the day ahead and while that was being done I decided to go ‘off piste’ and try an idea out to do a rear shot of the car with the doors open above the body as in silhouette it reminded me slightly of an angel. It was just one of those things you see and need to push yourself to try and achieve. The car was under strict embargo at that time and no shots were allowed in the public domain. However in the shot I did you just see the shape and McLaren ended up using it as a teaser for the launch. It was a good thing to try and it’s a recent favourite of mine. 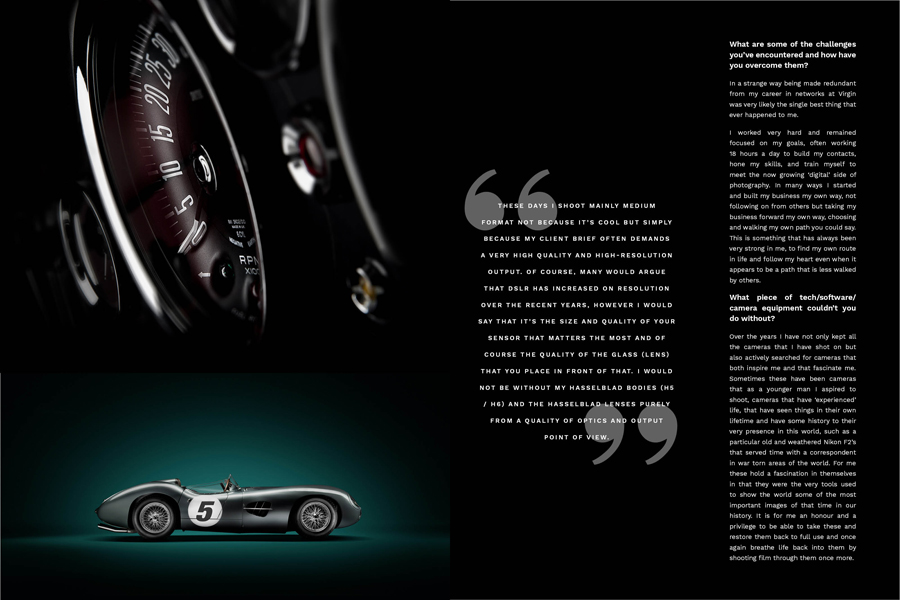 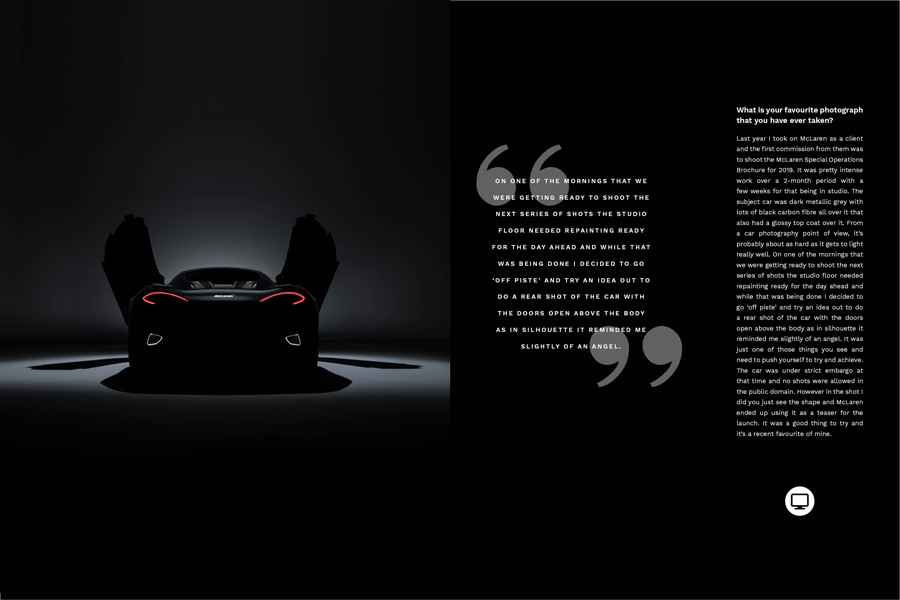