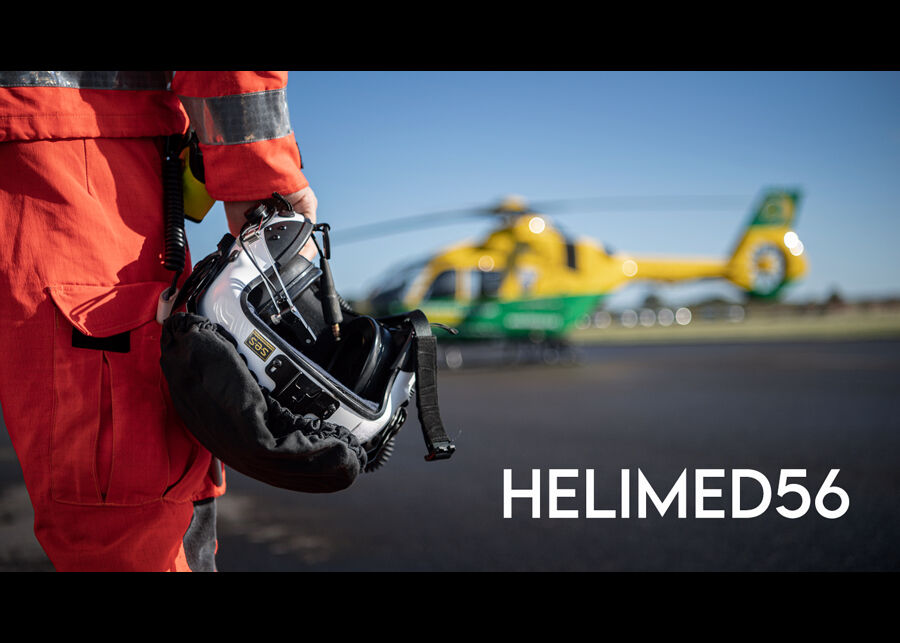 Our client Hampshire and Isle of Wight Air Ambulance recently asked us to work with them to capture and record the work that they do through their Air Ambulance operation HELIMED 56. Photographer Tim Wallace worked closely with the team over a period of months and recently went out on live operations with the HELIMED 56 crew to get a first-hand view of what their day can entail. All the work produced from this will be used to raise awareness of an operation that is entirely funded by donations from supporting businesses and members of the public.
11/10/2021 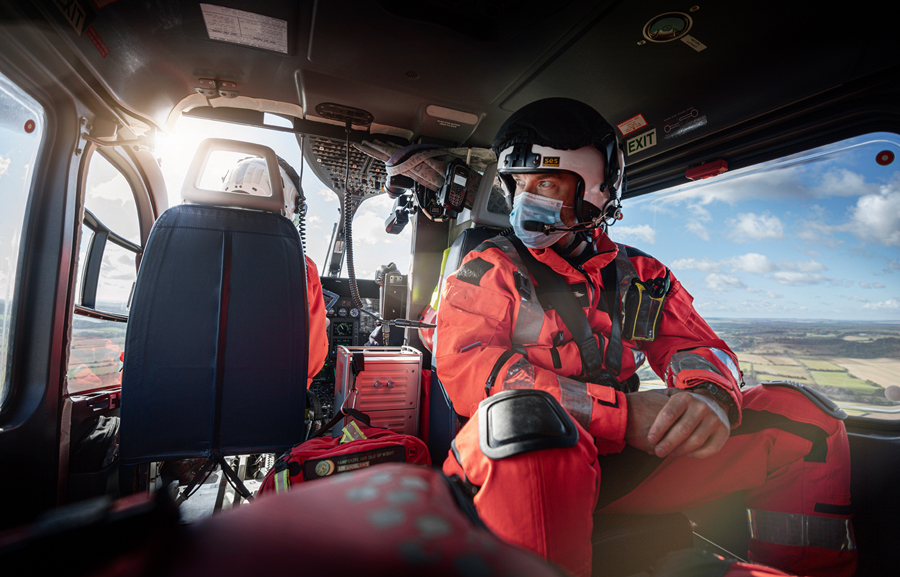 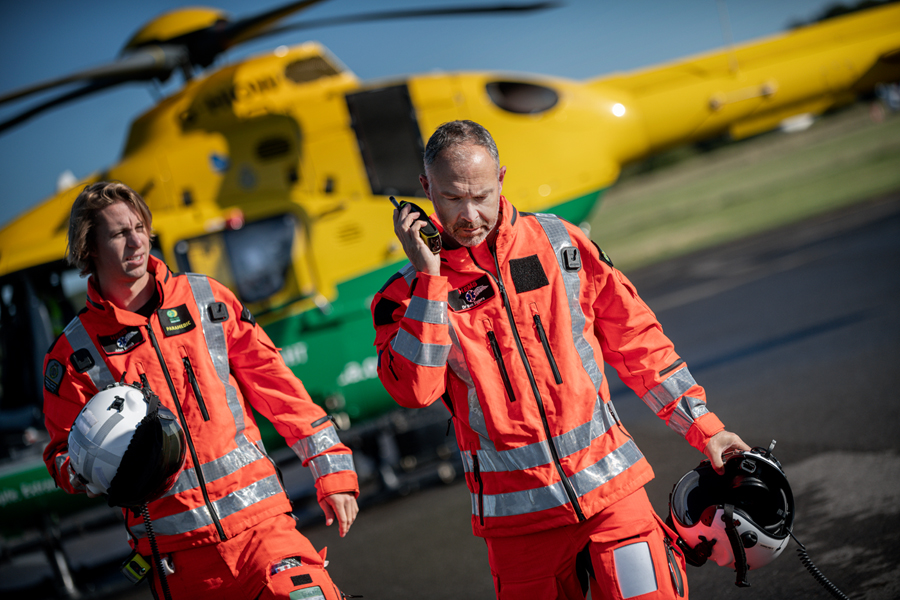 Tim - "I remember taking the initial call from the guys at Hampshire and Isle of Wight Air Ambulance (HIOWAA) back in early July and we discussed working with them to do a library of new photography to show all aspects of their operation, from the training scenarios that they run on a regular basis, through to their rapid response vehicle and finally the air ambulance itself. After several meetings we opted to approach this in a way that had not been done before in the UK, with myself actually going through CAA approved training so that I could stay with the HELIMED crew and go on live operations with them.

After a few weeks we had the required approval to move forward and over the course of a few weeks I completed a series of training courses and tests that would qualify me officially to be an active crew member, these were things like HEMS Technical Crew Member Theory, Aircrew Fire and Smoke Training, Escape Door Training for the Airbus Helicopter H135, Crew Resource Management Training, and the infamous Dangerous Goods Onshore (Helicopter) course. After completing these I worked closely with the team at HIOWAA and we worked out a plan so that over the period of a week I would be able to access and capture the varied elements to what they do. These were to cover everything from the regular critical care training sessions that they undertake with HEMs Doctors and Paramedics in training, through to the Rapid Response vehicle operations and finally the Air Ambulance itself." 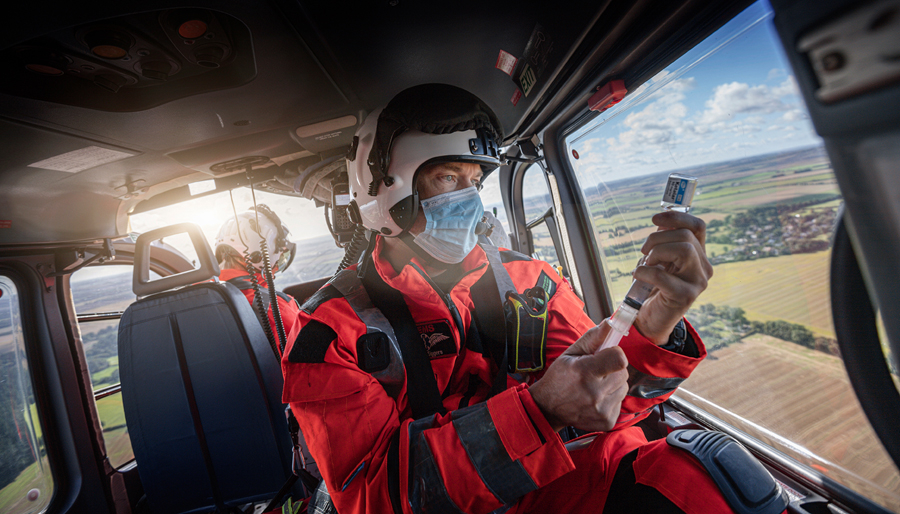 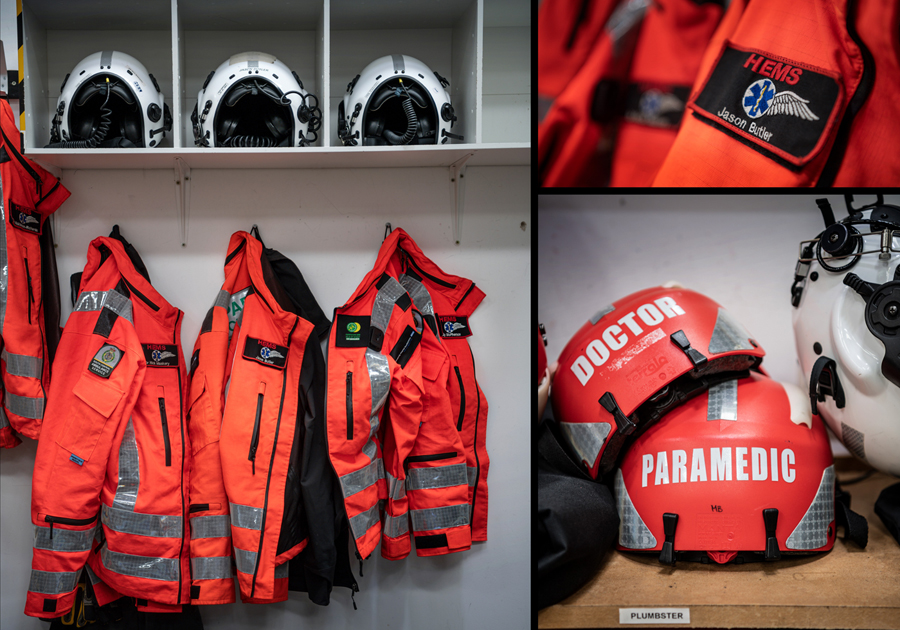 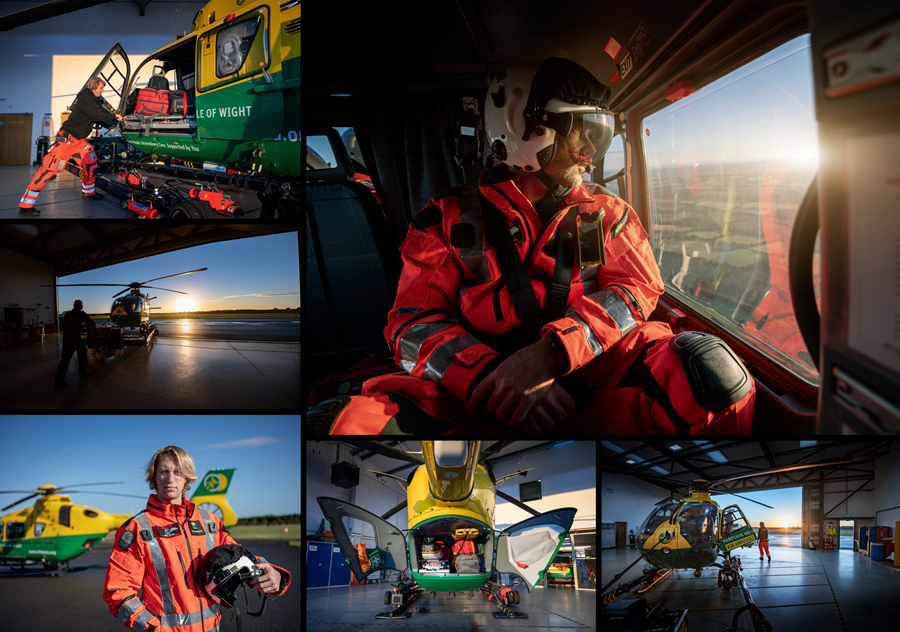 Tim - "It was a great honour to work alongside the critical care response teams to help document the incredible work that they do every day of the year from their base at Thurxton. Highly skilled doctors and paramedics that can be called upon to attend literally any severity of incident and are often first on scene.

My own personal experiences led me to understand that the term 'Air Ambulance' is quite an old misleading term that denotes people being airlifted to hospitals constantly whereas in reality it is more accurate to think of the team's role these days as being more one of getting highly skilled medical staff on scene as soon as possible to help preserve life, only airlifting when it is required or quicker as an option to the right hospital, this keeps the helicopter 'online' for active calls for longer.
40 paces are the maximum number of footsteps I counted while at the base from any one point to the helicopter with the rotors turning within 2 minutes of a call coming through.

These people do an incredible job is sometimes very difficult situations and locations, often with very little time to decompress between incidents, all of this funded through charitable donations made by business and the public.
All the work that I shot will now be used to raise awareness of their operations and help drive continued funding to allow them to stay in the air saving lives because 'every second counts' " 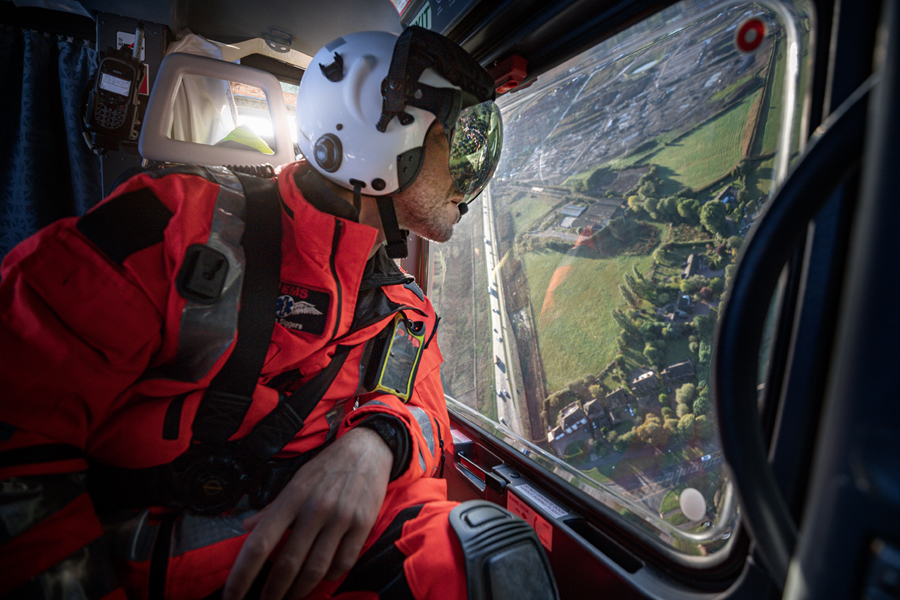 Tim - "Working with the HELIMED crew over the course of those days I got firsthand experience of not only the amazing work that they do but also some of the issues and problems that they face each and every day, things that many of us would never think about when we see an HELIMED Helicopter in the air. Often the crew can be 'first on scene' as they will often be the fastest to respond, this means that when they approach the location where the incident has been reported they will often need to circle first to locate the exact position. This is the point when it's all eyes looking out front, left and right to get that pinned down as soon as possible. Once the location has been identified the next task that the pilot faces is to look at possible viable landing sites that are as close as possible to where the reported patient is. He needs to look not only at where it is safe for him to land but also what the terrain is like between that landing area and through to the patient location as the crew will need to make that last stretch on foot and with an ever-growing amount of equipment to carry. There is also the possibility that they may need to recover the patient back to the helicopter if it is deemed necessary to fly them to the nearest or best served hospital to deal with them, rough ground and hurdles such as fences and walls will make that difficult, all these are factors that the team are looking at and constantly discussing over the helicopter COMs.

Both urban and rural locations offer their own unique sets of problems, something that I saw first-hand, for example in rural area's the pilot is always aware of nearby horses as these can spook easily with the fast-turning load rotors, and cows although calmer have been known to come over to a helicopter once its landed and start literally rubbing themselves against it, or crowding around it making take off near impossible. Urban areas might seem like an easier option but in truth where a school playing field might seem like a good easy place to land this does not account of the children who can sometimes run towards a landing helicopter, something every pilot wants to avoid.

All of this happens in a matter of moments and the skill of the HEMs pilots is second to none, as soon as the helicopter is on the ground the team are starting to unload their equipment and get ready to move as quickly as possible to the patient. Ordinary people who have worked very hard to become highly skilled in what they do, people who work tirelessly to respond as quickly as possible to those in need and with a passion to preserve life". 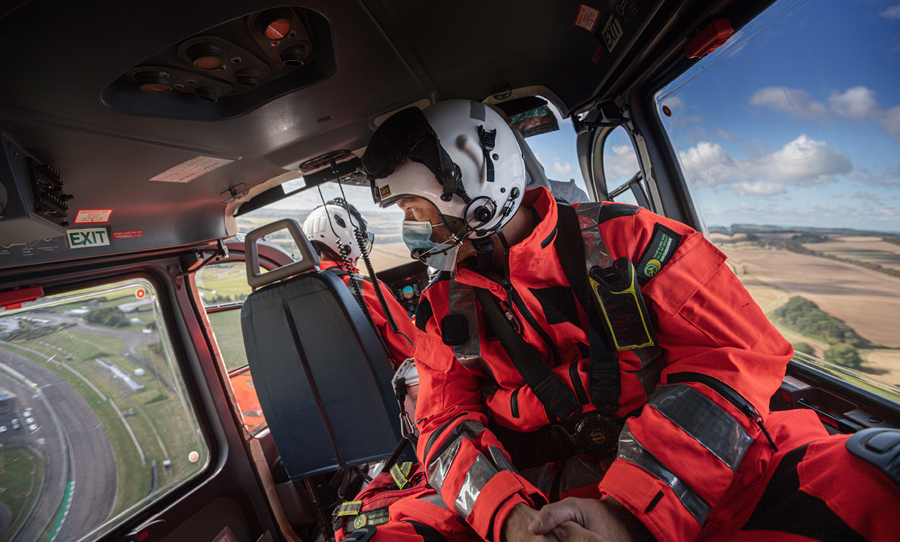 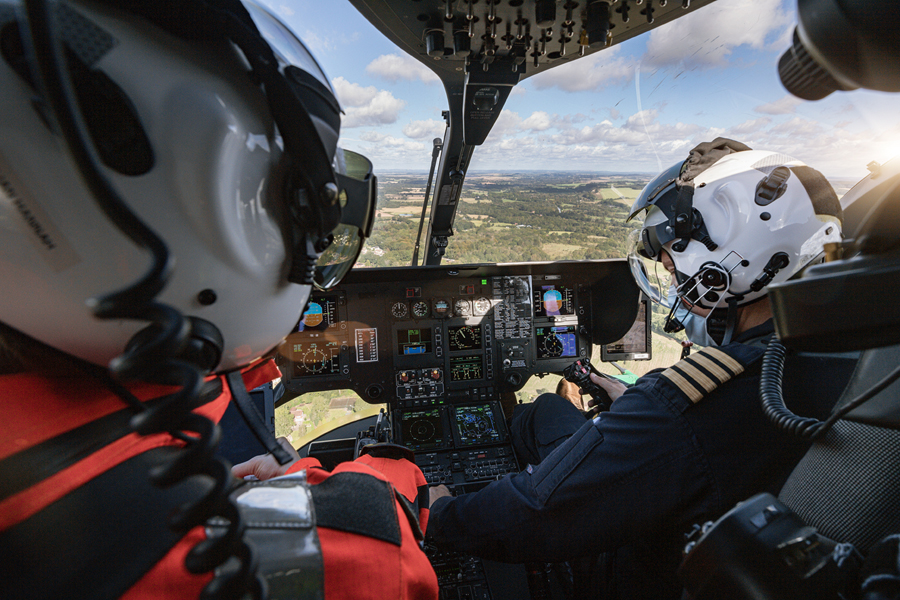 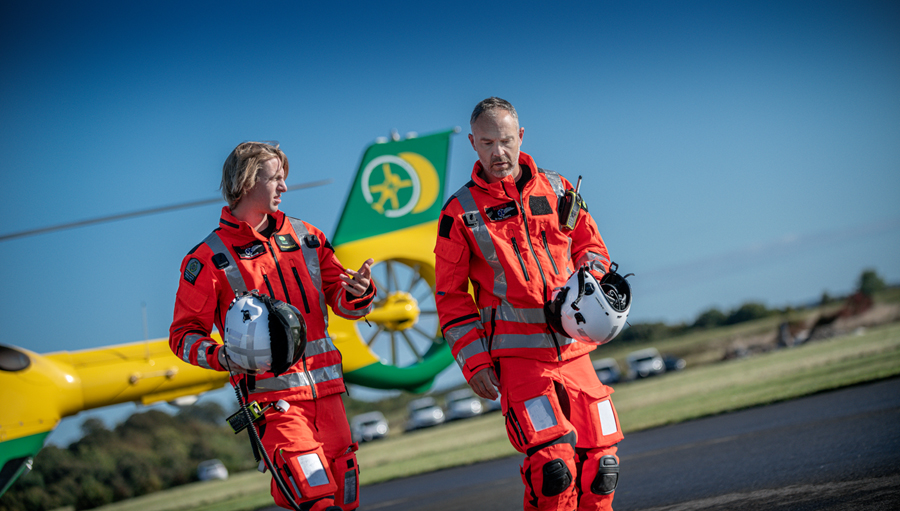 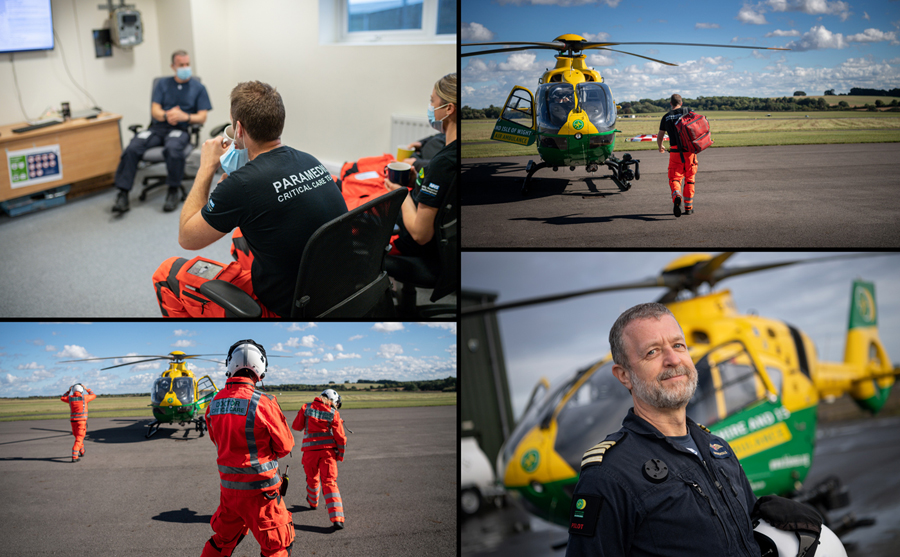 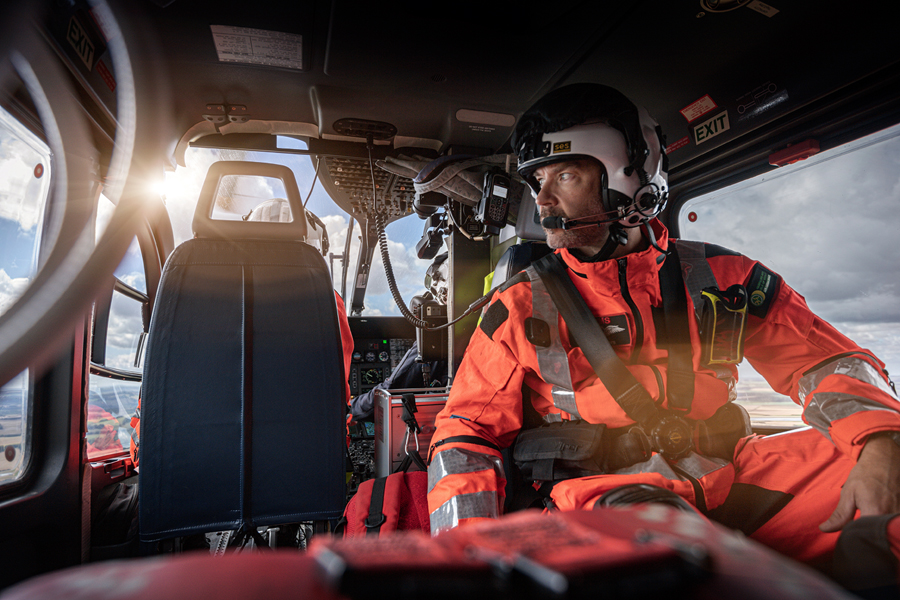 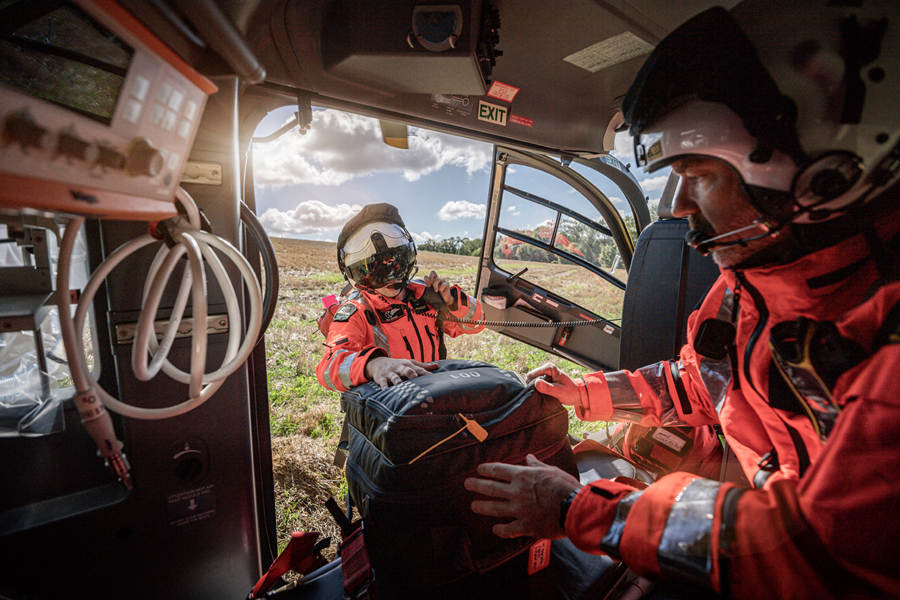 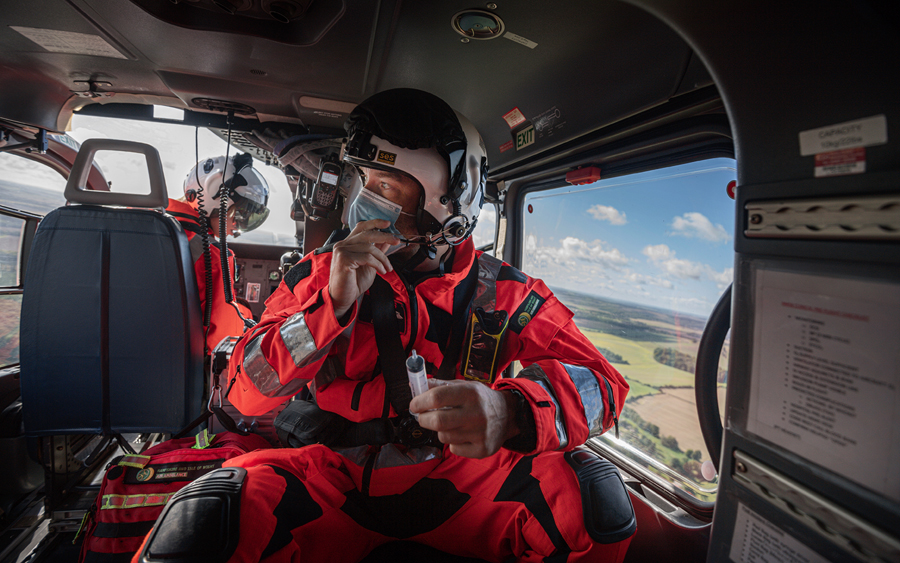 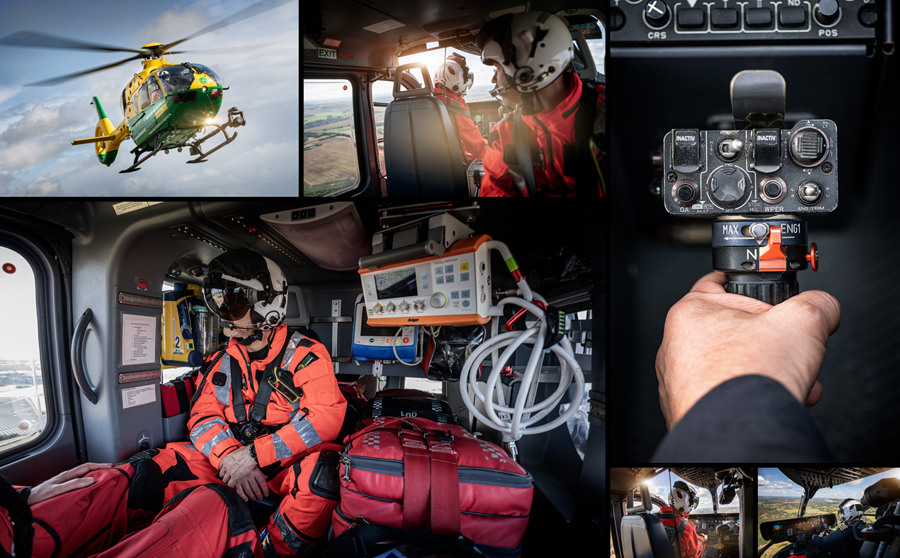 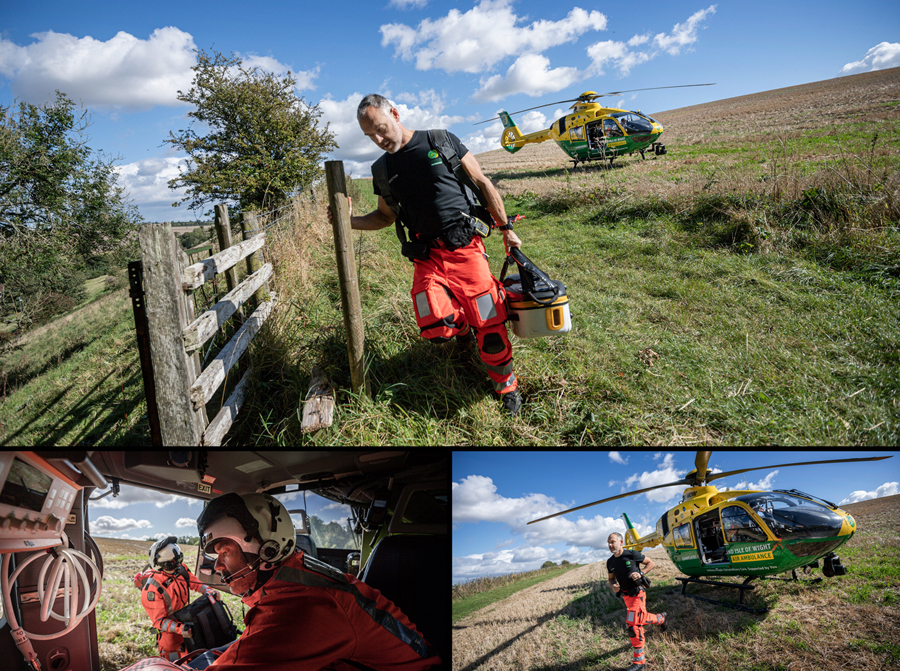 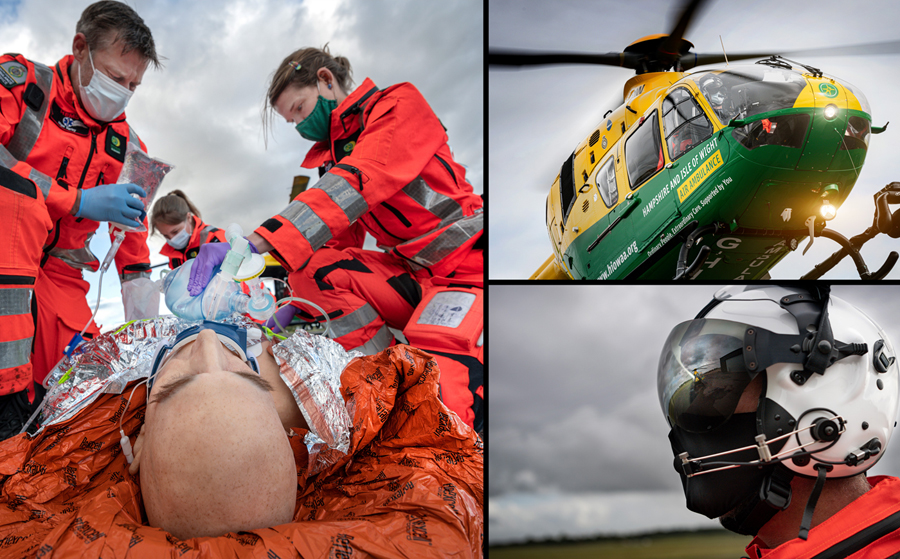 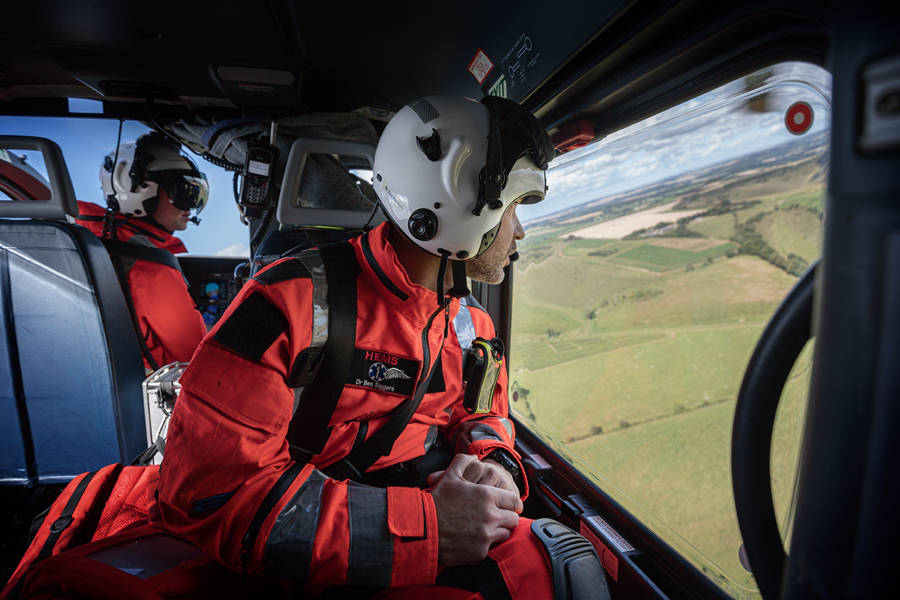 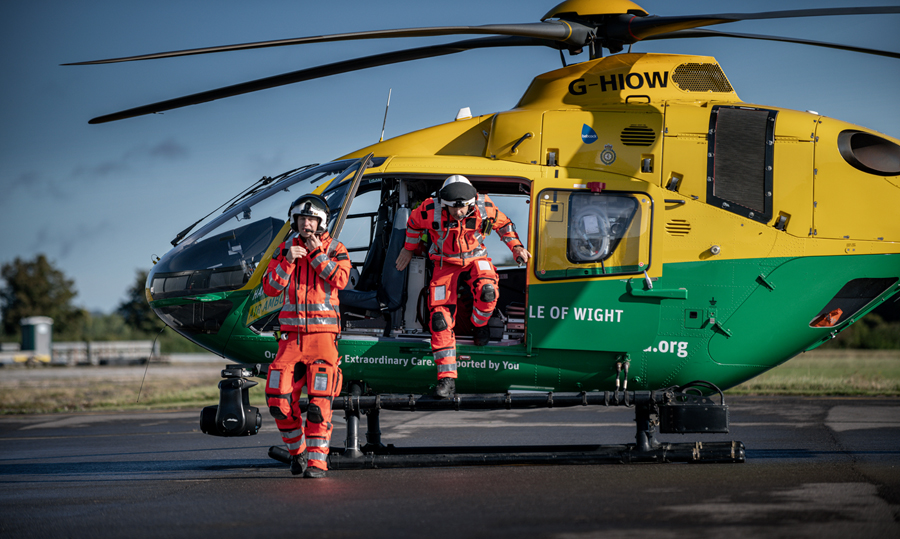 Behind the Scenes with Photographer Tim Wallace 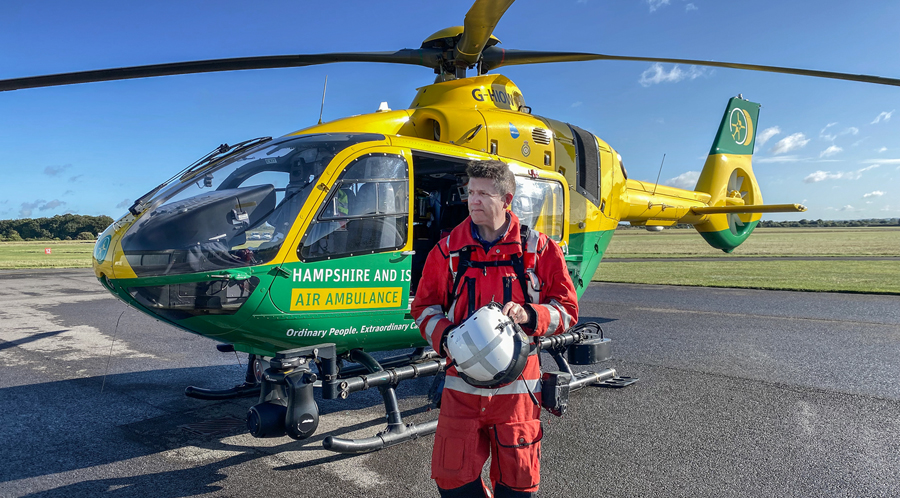 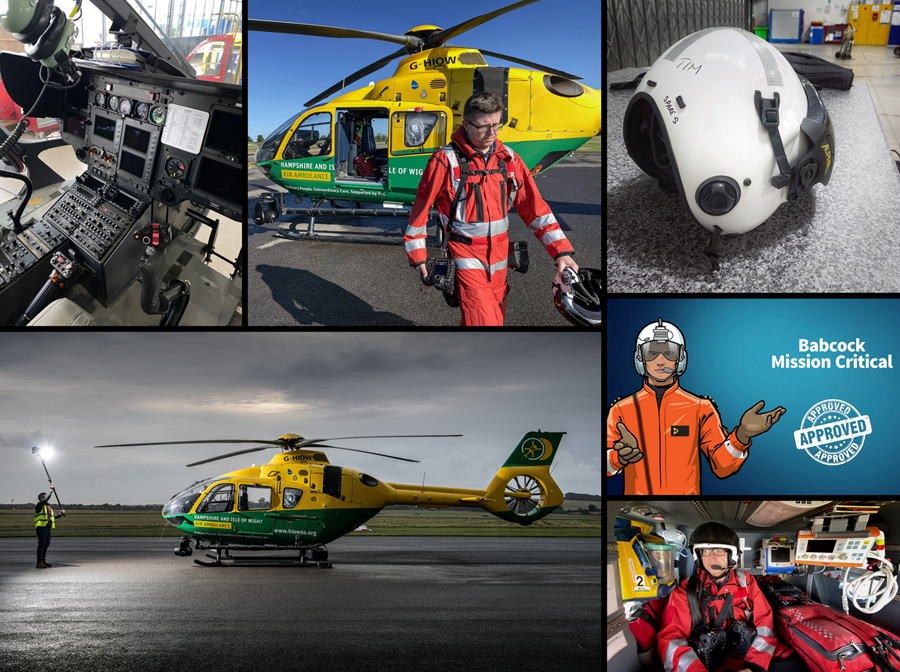